Through the Looking Glass Synopsis 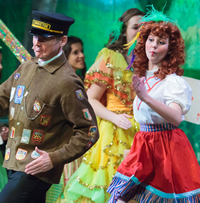 When Alice is waiting for her parents' guests to arrive, she plays chess with herself to relieve the boredom. Her governess, Miss Prickett, arrives to scold her for being childish, closing the music box she has been listening to and taking her toy Humpty Dumpty from her, telling her that she needs to grow up and learn some respect. As the guests arrive, Alice is out of her depth in the adult conversation but is excited by the prospects of fireworks at the end of the evening. When the guests leave for dinner, she meets a strange guest, Mr Dodgeson (Lewis Carroll) who tries to show her that her imagination is the one thing that makes her special. While showing her the Looking Glass, (Look Deep In The Mirror) Alice notices something curious. As she stares into the mirror, she is pulled into the Looking Glass World.

The world is in turmoil. Alice hides from the advancing Red Knight and his guardsmen, who are searching for the White King and Queen. She meets the White King who tells her that the Red Queen refuses to relinquish the throne and, without the constant game being played by both sides, the Looking Glass World will die. He enlists her help; she must take the throne from the Red Queen (The Other Alice). Alice reluctantly agrees as she is told the only way home is through the Looking Glass in the Red Court. As the Red Knight returns, a White Pawn draws the attention from the White King and Alice. The White King escapes and Alice runs into the Forgotten Forest. The Red Queen enters with her bloodthirsty Momeraths and learns that Alice has returned. She tells the Red Knight that unless he captures Alice, his head will be forfeit. The White Pawn is set upon by the Momeraths.

Alice is lost in the Forgotten Forest, and, as she sits despondently, she comes across what appears to be a railway station. The passengers are all mad and, upon hearing that the effects of the Forgotten Forest have taken their toll on Alice, they hastily retreat (Tickets Please!) Alice has forgotten her name and, as she sits and cries, the ancient White Knight comes to her rescue. He plays a music box which is attached to his horse, Chequers, and Alice’s memory starts to return (What’s In A Name). The White Knight says he will protect her on her quest for the Red Court. The Red Knight appears but is addled by the forest and doesn’t know what he should be doing. Alice and the White Knight leave him there to, hopefully, choose a better identity for himself.

In the Red Court, the vicious Red Queen has the Red King in her spell. By applying a sleeping draft, she rules the land by whispering what she needs into his ear and his dreams are hers. Anything he dreams becomes real. When she hears that Alice has not been found, she flies into a rage but is appeased by the fact that Alice will not be able to breach the Great Wall, guarded by the infuriating Humpty Dumpty.

Alice and the White Knight are confronted by the self important Humpty Dumpty who tells them that there is no way through to the Red Court (I Look Down). When Alice realises all Humpty’s worth is just a front, the wall begins to crumble as does his facade. Alice and the White Knight have breached the wall but Alice starts to feel that she is too young to take on such a task and questions herself. The White Knight tells her that it is only natural (Small). Upon seeing the light and order starting to return to Looking Glass World, they take heart.

When the Red Queen is told of Alice breaking through the Great Wall, she decides to let loose a great nightmarish beast upon the land in search of them. By raising the nightmares of the Red King, he dreams the atrocity and it rises up to do it’s Misstress’s bidding (The Claws That Catch). 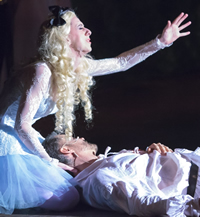 In the Red Court, Alice is given an examination to become Queen which is so nonsensical that she fails and her failure means that she will be beheaded at dawn (You Must Know Something).

Placed in a dungeon to await her execution, Alice meets the White King who has been captured and is told that they have only one more chance. Alice understands that all the lessons she has learnt on her journey has matured her. She sees things differently now. The childhood Alice leaves her and she is a new and adult Alice (Growing Up). Alice is told by the White Queen that the key to the downfall of the Red Queen is the Red King. She is taken to execution.

The Red Queen is given the spoils of the Jabberwock battle, Chequers, the White Knight’s horse. She spurns it as a pile of scrap as Alice and the White King and Queen a brought to execution. Just as the executioner is ready to behead Alice, she escapes and tries to wake the Red King. She cannot rouse him but as she is surrounded, she backs into Chequers and the music box falls from its back and starts to play. The Red Queen falls to her knees screaming as the Red King wakes furiously halting all proceedings. He give the music box to Alice and takes the crown from the Red Queen. He tells Alice she is to be Queen and forces the Red Queen to drink a toast to the new monarch with her own sleeping draft. She is banished to the nightmares he once endured. Alice admits that she doesn’t not want to be queen and the game should start anew. Looking Glass World is saved and all the pieces are reinstated, including the White Knight. She says her farewells and steps back through the Looking Glass (Oh Frabjous Day!/ The Other Alice (Reprise)).

Mr Dodgeson (Lewis Carroll) wakes Alice who tells him of her wonderful and frightening dream. They watch the fireworks through the window and Mr Dodgeson understands that Alice is different (Small (Reprise)). She has grown up. He bids her farewell as she runs off to tell her mother of her dream. Mr Dodgeson laments Alice’s loss of childhood and stares in the mirror into the mournful face of the White Knight. The mirror illuminates and Mr Dodgeson is gone. The White Knight slowly fades from view.