Making Sense of the Nonsense 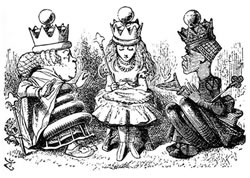 In 1871, soon after his father's death, Lewis Carroll published the second book of Alice's Adventures, Through the Looking Glass and a darker wonderland was born.

Born in 1832, Lewis Carroll, the pen name of Reverend Charles Lutwidge Dodgeson, was a shy eccentric bachelor who taught mathematics at Christ Church, Oxford. His fondness for playing with mathematics, logic, words and nonsense came to fruition when penning Alice's Adventures, two of the most popular children's books at the time.

Over the past 150 years or so, the books have been held up to much scrutiny by critics and psychologists alike who strive to find the hidden meanings and veiled historical satire among other things, seeking a deeper knowledge of the author and his eccentricities.

Much of the humour is lost on the modern reader and the wordplay sometimes obscure to say the least. How, then, do you begin a theatrical adaptation of an episodic and disjointed dreamscape that is firmly based in antiquated wordplay?

To create a solid dramatic through line, it was necessary to give Alice a journey, a quest to interest the audience by presenting her with a task at which she could succeed or fail.

Using the idea of a young girl on the verge of becoming an adult helped to structure a new story from the episodic nightmare she was to be caught in. Whilst keeping close to the characters that inhabit Carroll's nonsense, it was necessary to give them a different purpose on Alice's new journey, they would become pieces in the game that she plays to become an adult, all representing something to be learnt on her rites of passage.

Tumbling Alice headfirst into a world in flux; a world which needed her help in correcting would become the task she would have to fulfil against all odds.

Her main adversary, the Red Queen, would represent the childlike traits she was about to escape and the defeat of the Red Queen would be the final task to put wonderland to rights and allow Alice to move on.

I hope to have done justice to Carroll's work without taking too many liberties but what has emerged is an intricate story of a young girl becoming an adult.

A fresh take on an old classic will bring something to both lovers of the original and those who come to Alice's adventures anew. Filled with enchanting music, action and laughter, this adaptation is a tantalising journey for both young and old.