About The Adventures of Mr Toad

The Adventures of Mr. Toad

Was first performed at the Haymarket Theatre, Basingstoke in December 1984, and subsequently at the Theatre Royal, Winchester in January 1985 and at the Bloomsbury Theatre, London in December 1986/January 1987. 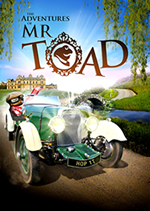 A fun-filled musical adaptation of Kenneth Grahame's "The Wind in the Willows" which relates the fall and rise of the impulsive Mr. Toad through a series of daring adventures. The invaluable support of his riverside chums helps to bring about a joyous conclusion. This delightful show is ideal Christmas and holiday fare.

The 1987/88 Christmas Season saw Mr Toad break box office records at The Bristol Old Vic and that year the show was also presented at The Secombe Centre, Sutton, followed by a UK tour in 1988. In 1988/89 Mr Toad was seen at The Olympia Theatre, Dublin for a sell-out Christmas production. And he broke box office records again when he arrived at The Watermill Theatre, Newbury, for their 1996/97 Christmas Season. Today the show is also popular and frequently presented by amateur and school forces. In the USA, The Adventures of Mr Toad is published by Music Theatre International.

Everything you need to know about The Adventures of Mr Toad.