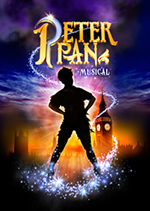 The London and New York theatre publishers, Samuel French Ltd, first published Piers Chater Robinson’s Peter Pan Musical in the UK in 1985. It is now in its third edition and fourth reprint and has sold thousands of copies in most English speaking countries. Over the last 25 years, the show has enjoyed many box-office record-breaking seasons in United Kingdom theatres (including London’s West End) and it has also been performed in the United States, Canada, Australia, New Zealand, Saudi Arabia, Qatar, Dubai, Japan, Mexico, India, Sri Lanka, South Africa and across Europe.

In 1998, he directed a new Danish translation of the show in Aarhus, Denmark that went on to break the theatre’s 100-year box office record.

That same year the show was also translated into Spanish and, with a new album recorded and released in Spain, it opened in Madrid’s largest theatre and was awarded Spain’s “Max” award for best family musical. Between 1999 and 2001 the show toured throughout Spain.

October 2001 saw the Dutch premiere, again directed by Piers, which starred the Netherlands’ leading artistes Vera Mann and Peter Faber. This production toured the Benelux until mid 2002. Prior to rehearsals, Piers Chater Robinson also co-produced the recording of the new Dutch CD of the show, which was released on the Universal and Decca Record label.

2003 saw the Musical’s triumphant return to Denmark for the Christmas season, directed again by Piers, where it broke box office records for the second time.

Since then, in addition to ongoing international professional presentations, the work has been translated into seven further languages and is now also a global favourite with schools and amateur societies.